Every week we recommend something we love that is available via Netflix instant view, the greatest thing ever created! Enjoy! 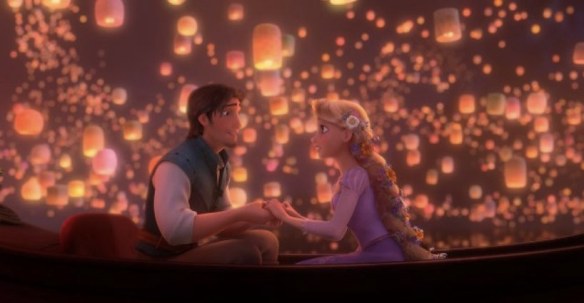 Sorry gentlemen, I had the gals in mind when I decided on today’s Netflix Instant Picks. But that doesn’t mean you can’t still enjoy the magic of “classic” Disney! This is especially the case with our first film based on the Rapunzel fairy tale but marketed to both girls and boys as the gender neutral Tangled (2010). Originally titled Rapunzel, filmmakers decided to change the title to Tangled after The Princess and the Frog (2009) failed to draw in crowds a year before. For whatever reason frilly dresses and the word ‘princess’ scare away young male viewers. So they beefed up the male lead role of Flynn Rider (voice, Zachary Levi) to accompany Rapunzel (voice, Mandy Moore).

The film is by all accounts a literal translation of the classic fairy tale, but I can’t remember the last time I fell in love with a non-Pixar, Disney produced animated film. Needless to say it’s been awhile. Mandy Moore is excellent as Rapunzel, a sheltered young girl attempting to break free from her stepmother’s clutches for the first time in her life. The adventure she embarks on with Flynn as her guide is nothing short of pure fun. The music is also something to be treasured, and although it was the song “I See the Light” that earned an Oscar nomination, my favorite song and performance of the film has to be “Mother Knows Best” sung by Donna Murphy as evil stepmother Gothel. Also, artists schooled in the Pre-Raphaelite style will notice its influence in the visuals and color palettes throughout the film. It’s just one of the many ways Tangled blends traditional animation styling with sleek and modern CGI effects. 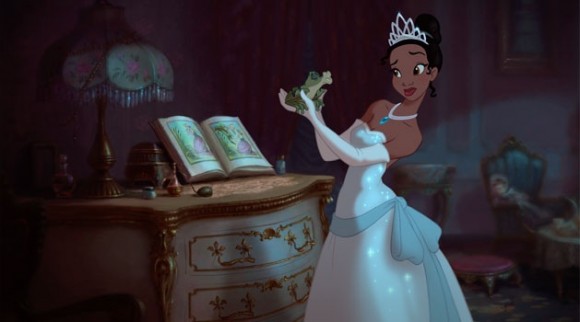 The Princess and the Frog was released just a year before Tangled and while it earned critical praise, it failed to be the financial success everyone had hoped it would be. The financial failure has little to do with the quality of the film and more to do with the difficulties of marketing an animated film without the Pixar seal. And as stated before, there’s that pesky word ‘princess’ in the title. It’s actually a shame because I did enjoy the film, although I can understand why it actually may have gone over kids heads a little.

Instead of setting the story in a “fairy tale” land, The Princess and the Frog is set in Jazz-era New Orleans in the 1930s. As fascinating a time as this era was, it encompasses very complex social, economic, and societal overtones that are difficult to fully articulate in a film aimed at children, although I was impressed that they existed at all. In the end, I think parents will get more out of a film like this, but the heart behind the character of “Princess” Tiana (voice, Anika Noni Rose) is hard to ignore. The film also boasts the voice talents of Oprah Winfrey, Terrence Howard, and John Goodman. Never a bad thing!

Again the tale is quite straightforward but instead of a helpless ‘princess’ character, Tiana has her sights set on opening her own restaurant. She ends up getting sidetracked when a fateful kiss with a frog prince takes her down an unexpected road. Again, it’s not so much the story that appeals to me as my love for classic animation. The Princess and the Frog possesses some very memorable jazz-infused numbers that incorporate the traditional fantasy montage sequences we know and love from Disney. The artistry is something to be admired amidst the sea of 3D and CGI animated films.

Both Tangled and The Princess and the Frog are solid entries in Disney’s “Animated Classics” line, and proof that there are other viable studios besides Pixar producing quality family entertainment.

Watch The Princess and the Frog

Netflix Instant Pick runs every Thursday on Filmhash. Past picks are here.